Please check your e-mail for a link to activate your account.

Why not measure excess noise and treat it out to the 60 DNL contour as originally proposed? How can either of the two limited choices before you be in the public interest? If you lived under the parallel runways 50 yards outside the old and proven wrong 1996 contour, would you agree to choose between delay with a series of uncertain budget approvals or being ignored? Promises delayed now, maybe denied later? Or commitments now denied, after being acknowledged, but postponed, for years? Do you hold us ˆ and the Legislature -- simple for believing your testimony that the NCP was self-funding because PFC's increased with airport use? Do you not understand that this "compromise" is a compromise of your honor?

We agree with one part of the proposal before you: eligibility for any residential sound insulation program should not be based on projected noise exposure but on actual noise exposure. You are making phony projections of fleet mix, runway use, and number of daily operations (as manipulated and politically influenced by Northwest Airlines) your standard of fairness, and only a few of you seem embarrassed. We thank those few for their integrity, while we hope for an awakening of conscience and the emergence of a more responsible majority.

In the 1996 Minnesota Law, the Extended SIP, separate from Part 150, was to be implemented during and after construction of the new runway (1998 to 2004), as a condition of MSP expansion. The Commission made this three times negotiable with Northwest Airlines. First, the Commission dissolved MASAC at the behest of the airline. In spite of clear evidence that airport noise far exceeded that projected for 1996, your Part 150 NCP was never amended and you did less than nothing about actual noise beyond the wrongly projected for-1996 noise exposure map. We believe dissolution of MASAC, and the spending of AIP/PFC funds for staff support since, are each inconsisten t with FAR 150. Second, MAC staff, without any public notice or public input at all, agreed to reduce the planned budget for, and to delay implementation of, the Extended SIP. This was more than a year before the terrorist attacks, at a time when MSP use by Northwest was being expanded (and use by competing airlines limited), whether use were measured by passenger market share, gates leased, or percent of operations per day. We doubt the negotiation was within the lawful authority of the Commission. No one represented the public interest in these negotiations, so that was your duty. You ducked.

Third, you now entertain a recommendation by Northwest to just skip the Extended SIP. A desperate group of cities, thinking you will cave in to Northwest again, proposes to further delay the Extended SIP, with need based on a preliminary noise exposure map. The map was made from biased premises already conceded to Northwest Airlines in prior NOC meetings. We also doubt that these delays and limitations are within the lawful authority of the Commission. We believe you know representations were made by the Commission (as constituted in 1996) that MSP neighbors would be shielded from excessive noise when a trade-off was made to subject thousands of us to increased noise rather than re-locate the airport to a less-developed site. In testimony before the legislature, the Commission said if airport use continues to grow at the current rate, total noise exposure around the airport during constructio n will far exceed 1995 levels. The Commission stated publically and testified before the Legislature that MAC would continue noise abatement and noise mitigation programs specifically recognizing that more traffic would necessarily use the parallel runways until the North-South runway was completed. In effect, you proposed the Extended SIP. We see that it was adopted in Minnesota law and incorporated by reference in the ROD.

There were over 4,000 residential housing units in the 64-60 DNL using the dual-track noise map based on actual 1996 use, and more in maps prepared for the EIS in 1998. Another 2,000+ were in the 65+ DNL area under the parallel runways compared to the "Official" map. These are the maps referenced in the Record of Decision. A 5db SIP treatment, in 1998 dollars, was estimated at $42,000 per unit. MASAC noted in 1998 that there were more flights using MSP that year than had been projected after 17-35 was completed; in fact, no new runway was even needed to attain 2020 projections in annual operations . MAC ought to have updated its NCP and asked for at least $100 million in additional PFC funds (in addition to funding for noise mitigation under the new runway) and budgeted close to $250 million for the Extended SIP.

1. Excess noise is additional or unabated noise compared to projected (modeled) noise. If abatement measures succeed, or operations are reduced, both 65 and 60 DNL contours will include fewer buildings and mitigation (insulation) costs would be reduced. Reduced SIP costs are an incentive (carrot) to be earned by the airlines, and the more higher PFC's stimulate airline/airport competition, the greater the motivation (stick) for airline efficiency.

2. As well as the Part 150 NCP and various other, in fact most, environmental compliance projects.

3. The Official NCP created MASAC to ensure participation by the impacted citizens and FAA recognized the value by approving MASAC as a needed action.

4. In a widely publicized table, actual flights using MSP and the parallel runways exceeded 125% of operations as projected bt MAC, proving that more operations, not fewer, would use the parallel runways after 17-35 was opened than used them in 1996. Moreover, projected retirements of the noisiest aircraft were unrealized in 1998-99, as SMAAC noted at the time, making 1999 the worst year-case noise exposure year for Minneapolis, Richfield, Mendota Heights, and Eagan (unless 17-35 were delayed or unable to support 25% of all operations due to time-of-dayor rate demand and safety rules).

Listening to the Neighbors

Dan Wascoe's article [Jet Noise debate ready to takeoff, Metro section, Mar 22] has the revealing quote from MAC Chair Vicki Grunseth: Commissioners "need to listen to the airlines" meaning of course, agree with Northwest. What the Commissioners need to do is listen to the airport's neighbors and follow the Minnesota law incorporating what anonymous Commissioners called a trade-off for expanding MSP (for increased hub use by Northwest Airlines) instead of building a new airport where far fewer people would be harmed by noise and other airport pollution. Commissioner Houle is right that "What this area has done clearly exceeds [federal] guidelines." In approving the Environmental Impact Statement for MSP Expansion, the Feds said, in effect: Minnesota chose a course of action that, without necessarily meeting future air transportation needs, will likely require noise mitigation for 17,000 rather than less than 1,000. Commissioner Houle is technically correct: Federal guidelines are to minimize environmental impacts.

MSP expansion costs are over $3.1 billion. A pretty high price, not including the bulk of the extra noise mitigation trade-off, mostly for Northwest Airlines' benefit. The $214 million sound insulation program to date may have "bought" negative "without delay" capacity, and local MSP users will pay higher fares (to offset cost increases). The media doesn't report that actual airline use of MSP in 2000 (524,000 operations) exceeds the capacity that Northwest and MAC claimed, in 1996, could not be attained without a new runway, or that this level of use was never mapped without assuming substantial use of a new runway. In other words, the trade-off, and the "commitment" was for a combination of noise abatement and sound insulation for long-suffering neighbors under the main runways. The issue at hand is not whether "houses in the 64-60 DNL areas as mapped for 2007 operations" deserve treatment, but that MAC chooses to ignore the facts:

There is considerable doubt that the 2007 map is reasonable. Thousands of untreated homes, apartments, schools, churches, hospitals, nursing homes, and businesses were exposed to more than 65 DNL noise, according to maps made by MAC between 1995 and 2002, and more homes and schools should have been removed or converted to more compatible use because of 70+ DNL exposures. MAC and Northwest Airlines conspired, in 2000, to both reduce Northwest's lease rates and accelerate aspects of MSP expansion that allowed increased use of the main runways. Between 1996 and 2001, Northwest was permitted to expand its control of Lindbergh Terminal gates and increase its use of the main runways at peak (hub connection) hours. The 1996 noise compatibilit y plan did not forecast this level of use; MAC said use would be less because of the limited capacity of MSP without a new runway. Another reason Northwest was able to extend its hub operations was the Commission's investment in improving the reliever airports. The name "reliever airport" refers to directing slower and smaller aircraft away from MSP so that peak use rates could be increased. Small private planes and some turboprop airliners could not "keep up" with approach traffic flow or take-off as soon after a large jetliner. By these policies, MAC steeply increased noise compared to projections and disadvantaged Sun Country (trying at the time to operate scheduled flights) and limited the facilities available for new, competing airlines such as Southwest or Jet Blue.

AIRPORT NOISE is "real and mitigation by insulating homes doesn't make it go away." Director Jeff Hamiel said in his presentation at the South Metro Airport Action Council's Fall Forum 2003. "MSP is the eighth busiest airport in the United States." Hamiel said "In 2020, we estimate over 48 million passengers will use MSP; this is 1,865 operations per day." Hamiel said the sound insulation program "mitigates airport noise by allowing people to escape it inside their homes" but "as soon as you open your windows or go outside, you can experience noise as loud as 98 dbA as a plane passes overhead. 98 dbA is REALLY LOUD."

Knowledgeable observers of Northwest Airlines were not surprised by their back-door deal with Senator Lott (R, Mississippi) to try to prohibit use of some Federal funds for noise mitigation in Minnesota. The insulation program was agreed to as part of a 1995 arrangement with Minneapolis for their support of MSP expansion. And, although Metropolitan Airport Commission Chair Vicki Grunseth wrote "the process stank" and the bad effect was a "great deal on trust," she admitted MAC needed to use passenger facility charge revenue and airport revenue for an extended noise mitigation program, and it could be a budget problem.

Remarks to the Metropolitan Airports Commission

We are here because we believe the Commission takes its duties as a public agency seriously. We have for many years addressed the MSP Part 150 Noise Control Plan and noise mitigation program. SMAAC has not addressed its concerns over your heads to the Legislature, to the FAA, or to the US Senate. Ever since 1996, SMAAC has asked the Commission to do an update. In this instance, we attempted to comment, beginning on March 22, on your update process as announced. The process raced ahead, until your June meeting, when Commissioner Boivin moved deferring approval of the use assumptions to today. SMAAC appeared at the July 17 NOC meeting, but was not recognized. We believe MAC intended that NOC meet July 23, as suggested to NOC by MAC staff, the day after the quarterly public meeting. 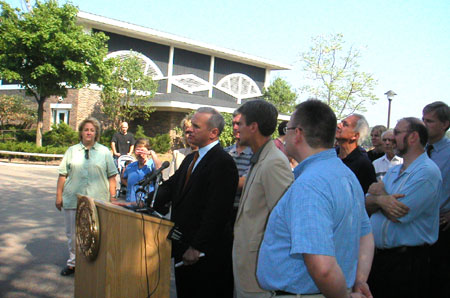 NWA is Messing with MAC and Minnesota

NWA CEO Richard Anderson reportedly said he wants a moratorium on implementation of the ... soundproofing program for homes that fall outside a 65-decibel noise range (emphasis added). If the quote was accurate, he dissembled and misled.